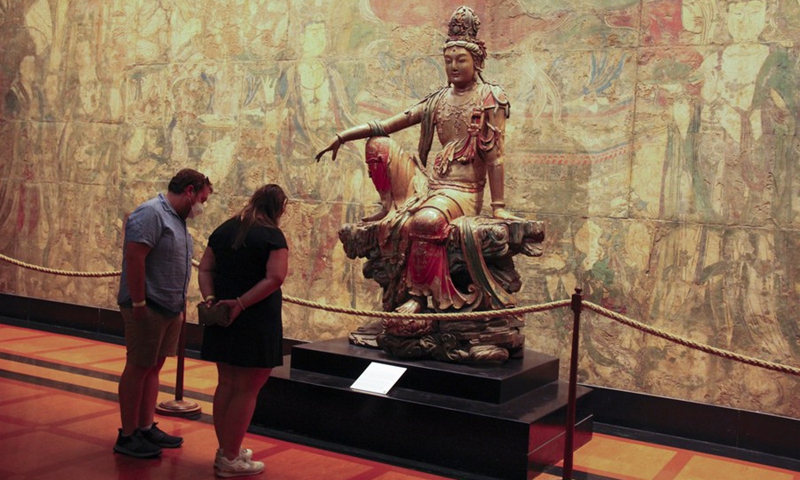 Visitors stand in front of the ancient Chinese sculpture “Guanyin of the South China Sea” at the Nelson-Atkins Museum of Art in Kansas City, Missouri, the United States, Aug. 11, 2022. (Xinhua/Xinhua) 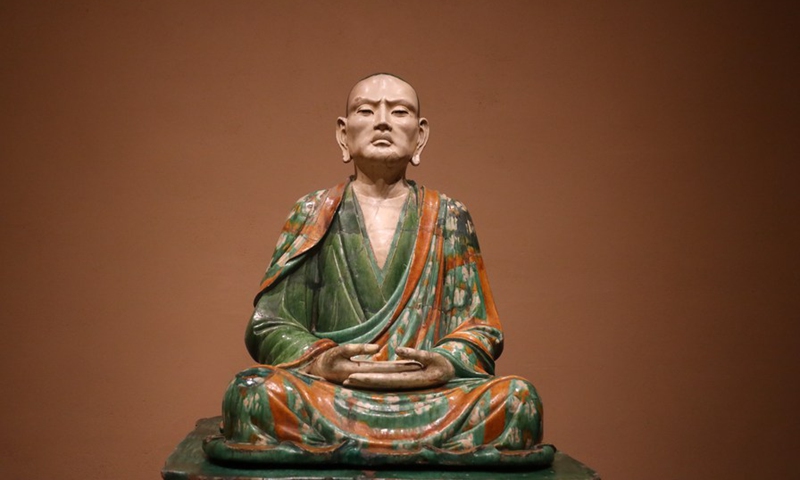 Photo taken on Aug. 11, 2022 shows a Luohan sculpture with tricolor lead glaze from the Liao dynasty to the Jin dynasty, on display at the Nelson-Atkins Museum of Art in Kansas City, Missouri, United States. (Photo: Xinhua) Photo taken on Aug. 11, 2022 shows a ritual jade disc with dragon motifs from the 3rd century BC, on display at the Nelson-Atkins Museum of Art in Kansas City, Missouri, United States. (Photo: Xinhua)

Two ladies in their 50s stand in front of Guanyin from the South China Sea, an ancient Chinese sculpture in the Nelson-Atkins Museum of Art in Kansas City, Missouri.

For the past 20 years, they have visited the museum, describing Mother Buddha as “beautiful, so serene, so sublime.” “There is a huge Chinese collection here. This (Guanyin) is the most spectacular,” they told Xinhua on anonymity.

The museum brings together more than 7,500 high-quality Chinese works, ranging from ceramics to furniture, and from paintings to sculptures.

“We may not have the largest collection of Chinese art, but it’s one of the finest in the world,” said Ling-en Lu, the museum’s curator and Chinese art specialist.

Since its launch in 1933, the museum has been actively collecting, preserving, studying and exhibiting Chinese works of art. And its Chinese art collection contains masterpieces at different historical stages.

The most admired Guanyin in the South China Sea, measuring 2.4 meters high, 1.68 meters wide and 1.1 meters thick, from the Chinese Liao Dynasty (907-1125) or Jin (1115- 1234), was carved from the trunk of a single poplar. The larger-than-life sculpture created a sense of calm and warmth in the room.

In front of a flower vase with dragon motif, a stoneware decorated using the sgraffito technique of the Northern Song Dynasty (960-1127), Lu said it was one of the few such vases to the world that remains intact.

A Luohan sculpture with tricolor lead glaze from the Liao dynasty to the Jin dynasty is found in the caves of the high cliffs of Yixian, in the Chinese province of Hebei. The solemn expression and dignity portray his concentration and spiritual presence.

Sealed in a glass cabinet, there are more than a dozen cricket cages, dishes and pots from several dynasties of ancient China. “They are very popular among children,” Lu told Xinhua.

An exhibition with the theme “Living Creatures – Animals in Chinese Art” was held at the museum, which displayed dozens of ancient Chinese paintings with images of animals in many art forms. The creatures in the paintings represented celebrations, personal messages, and even political and religious agendas.

The exhibition organizers have produced a set of cards, with images of animals on one side and their cultural significance in the Chinese artistic tradition on the other. For example, the egrets represent incorruptibility and integrity and the deer symbolize long life. Maps are provided free of charge to visitors.

“I find it very interesting, and the way things are drawn, it’s very cool,” 17-year-old high school student Camden Lombard told Xinhua after visiting the exhibit. “I feel like I know a lot more about Chinese culture and how they were back then, their beliefs and everything.”

“I want to go to China one day to learn more,” he added.

It’s “a great source of pride to have such a collection of Chinese art,” Christie Makar, an educator in the museum’s school outreach and education programs, told Xinhua.

She manages the museum’s Art Connection Kit, a collection of student-friendly materials designed to encourage multidisciplinary and hands-on activities. Local students can study Chinese art and culture while appreciating its diversity by exploring the museum’s Chinese collection.

“It’s kind of an eye-opener and we’re bringing the world together,” Makar said. “There are so many similarities and we can appreciate the beauty and the work that artists around the world have created.”

“We (also) try to make our students understand that there are differences, but they are beautiful differences, and we just try to understand and appreciate each other,” Makar added.

“We are at a time when it is sometimes difficult to look outside of your own personal perspectives,” said Marla Van Thournout, volunteer engagement manager at the museum. “I think having access to what other cultures have created, what they value and value and what was important to them, is really important in building that understanding of all the people we share this planet with. ”