Would you be willing to throw $1,000 on an art collection you couldn’t see before if it meant supporting local artists?

This is how the commissioner of the members-only art collectors club works. The club started in Miami in 2018 and will soon launch in Detroit.

To join the curator, members pay for a 10-month season that gives them access to “mystery works” created by star artists. Subscribers won’t know exactly what artists are up to until the end of the season, when they’ll receive limited-edition pieces that won’t be available anywhere else.

Detroit’s first season will feature works by local contemporary artists Darryl DeAngelo Terrell, Judy Bowman and Amna Ashgar. At a pre-launch event in late May, each artist released 15 limited-edition pieces to give potential collectors a taste of what the club would offer.

While the price of a subscription to Commissioner Detroit is yet to be set, a collector-level subscription costs around $1,200 in Miami. This $1,200 includes four exclusive works of art, studio tours, community programming and tours of private collections. There’s also a cheaper $75 subscription, but it doesn’t include any of the artwork.

Membership money gives artists complete freedom to create whatever they want during the season without worrying about getting into a gallery or having to sell the work on their own. Participating artists will each receive a $4,000 commission plus an additional $1,500 for materials and curatorial support.

Commissioner Detroit also donates twenty percent of its sales to We The People of Detroit, an organization that supports residents on “issues related to civil rights, land, water, education and democracy,” according to a press release.

“We believe the future of arts philanthropy is collaborative and community-driven, which for many reasons makes Detroit an ideal civic partner,” said Dejha Carrington, Co-Founder of Curator. “The city has long had an impact on art, industry, and social progress. Detroit stands out as a model of individuals challenging structural norms to create more equitable systems through its strong creative culture and fierce dedication autonomy and authenticity.

The curator is supported by the John S. and James L. Knight Foundation and Louis Buhl & Co. Detroit is the first city the subscription program is coming to outside of Miami.

Carrington tells us the group is still trying to find a pricing model for the Detroit market.

“We are less tied to the price level than to this idea of ​​group economy,” she says. “[In Miami] every collector gets essential works, plus programming, plus passes to Miami Art Week, which is our biggest local art fair, so the value is huge. It’s not cheap, but it definitely creates space for contemporary works. 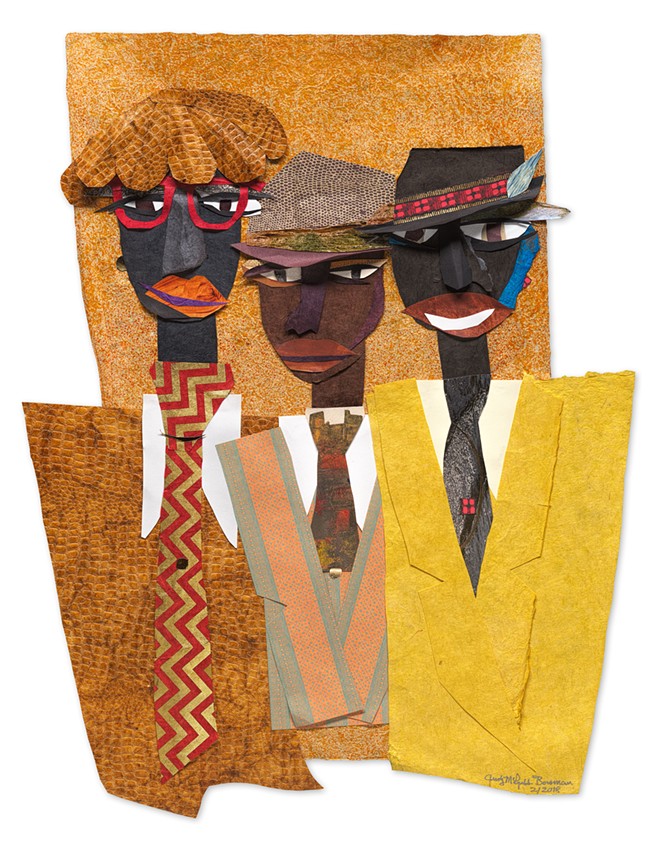 “In Search of Honeys” by Judy Bowman.

Bowman’s “Rise Up II (Yellow Shirt)” collection is already sold out, shortly after the pre-launch. The collection was a limited edition of eight signed and numbered pieces, plus two artist prints.

Bowman is a Detroit-raised, Detroit-raised, mixed-media collage and print artist. Her work visually pays homage to “personal memories of her coming of age in the Eastside and Black Bottom neighborhoods of Detroit,” according to a statement.

“To be selected to be one of Detroit’s inaugural artists is quite an honor,” she says. “Helping emerging collectors learn to be a collector advances the art world for their rights around the world. I believe these pieces will be relevant for new and seasoned collectors alike.”

Terrell is a Detroit-based BLK queer artist who explores themes such as female identity, displacement of black and brown people, sexuality and gender through photography, video and performance art.

Ashgar’s work, on the other hand, delves into the American experience by mixing images of cultural motifs like his family’s Pakistani popular culture ephemera to Disney films to Jean-Léon Gérôme’s Orientalist paintings. She also grew up in the Detroit area where she now resides.

Back in Miami, the organization has commissioned more than $200,000 in new work from local artists, organized more than 35 events, and “introduced more than 200 members to their local arts community in four years,” he says. .

While things are still in the works for Commissioner’s first season in Detroit, it will be interesting to see how this community program unfolds and what opportunities it presents for local artists.

More information is available at commissioner.us/detroit.