The works of the late artist Aref El-Rayess (1928-2005), a Lebanese painter and sculptor, are presented at the Sharjah Art Museum (SAM) – this is the artist’s first retrospective exhibition in the region (February 26 – August 7). The exhibition was opened by Hoor Al Qasimi, Chairman and Director of the Sharjah Art Foundation (SAF), and Manal Ataya, Managing Director of the Sharjah Museums Authority (SMA). The event is jointly organized by SMA and SAF.

Al Qasimi said, “It is with great pleasure that the Sharjah Art Foundation and the Sharjah Museums Authority join forces for the first major institutional exhibition of this important Arab modernist.

“We are also grateful to the Aref El Rayess Foundation for their support in this presentation which offers local, regional and international audiences the opportunity to appreciate and reassess their practice. “We hope this exhibition will encourage much-needed new research into the remarkable career of El Rayess.” The exhibition presents a selection of paintings, drawings, sculptures and collages which together reveal his rich and complex artistic practice.

A natural artist, the Sudanese painter uses tea and coffee to make colors

Memoir reveals how Molly Shannon rose to fame in Hollywood

“We are delighted to partner again with the Sharjah Art Foundation to bring the works of one of the most influential Arab artists to the public’s attention. “The exhibition is part of our ongoing joint efforts to celebrate the contribution of prolific Arab artists to the development of the art scene in the Arab world and to provide a platform for established and emerging artists to share their unique artistic experiences and earn the exposure they deserve,” Ataya said.

Many of the portraits included in the exhibition reflect how El Rayess’s travels to West Africa, particularly Senegal from the late 1940s to the 1950s, were key influences on his early work. A series of compositions illustrate the modes of abstraction explored by the artist after moving to the United States and then back to Mexico. 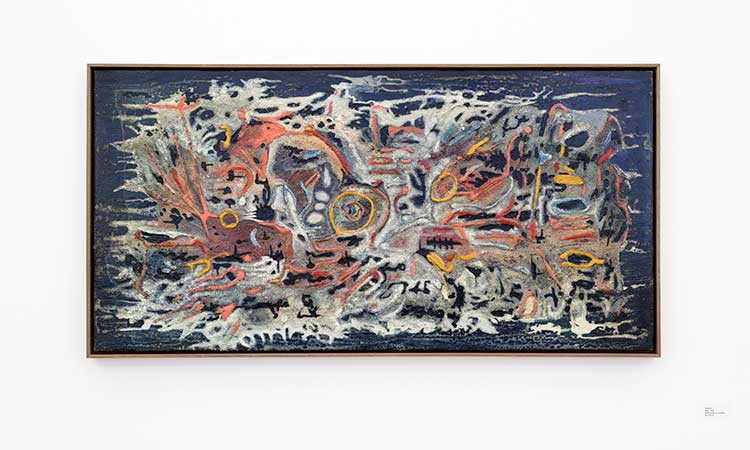 The exhibition illustrates El Rayess’ eclectic work in different mediums throughout his 57-year long career and how his travels through Africa, France, Italy, the United States and Saudi Arabia influenced his work.

A deeply political artist, the strength of his conviction is found in the paintings of the 1960s from his stay in Italy which denounce the brutality of the Algerian war of independence. Perhaps nowhere is this more evident than in his Blood and Freedom series, painted shortly after the Arab defeat in the Arab-Israeli Six Day War of June 1967.

Works from this series are included in the exhibition along with later works from the 1970s and large-scale collages from the 1990s that demonstrate the artist’s ongoing interest in the political, social and cultural conditions of the Arab world.

He was a prolific artist, best known as a painter; he also practices engraving, sculpture and tapestry. One of his tapestries, The Signs of Cadmus, is part of the collection of the UNESCO Palace in Paris.

His work focuses on human beings and their relationship to nature and history. In the 1960s, his paintings evolved around Man and the Third World and with the outbreak of the Lebanese civil war, El Rayess was among the artists who interpreted the tragic events in art.

Staying in Algiers, in 1976 he produced a series of engravings entitled Le chemin de la paix. He also develops a practice of abstract sculpture.

Born in Aley, Mont-Lebanon, in 1928, he was a laureate; A self-taught artist, he has worked with a variety of different media.

His art has gained international recognition and he has received numerous awards during his career, including the Lebanese Ministry of National Education Prize, the UNESCO Prize, the Ministry of Public Works Prize for Sculpture and the Sursock Museum sculpture grand prize. El Rayess spent time working in Saudi Arabia and was appointed Art Consultant for the City of Jeddah and was commissioned with monumental works for the City of Jeddah. The Saudi government commissioned him to make several sculptures, the most notable being a stylized name of Allah. Constructed in Italy from aluminum, the piece stands 27 meters tall in Palestine Square in Jeddah. He was a respected professor of fine arts, working for many years at the Lebanese University and the Lebanese American University, and was eventually appointed president of the Lebanese Association of Painters and Sculptors.

Internationally, his solo exhibitions include those at the Poliani Gallery, Rome; Numero Gallery, Florence; D’Arcy Gallery, New York; Excelsior Gallery, Mexico; the Rodin Museum, Paris; a retrospective of his works from 1957-1968 at the National Museum in Damascus; Ornina Gallery, Damascus; and Galerie Rasim, Algeria.

El Rayess pursued his passion for art until his death in January 2005. The current five-month exhibition in Sharjah is supported by the Aref El Rayess Foundation and the Sfeir-Semler Gallery, Beirut/Hamburg. It gives visitors the opportunity to explore the artist’s iconic works and his stunning use of color and abstract patterns.

Before this retrospective, SMA and SAF presented major exhibitions such as Lasting Impressions: Adam Henein, which refers to Henein, recognized as one of the most prominent sculptors in the Arab world and Mona Saudi: Poetry and Forms, which was a solo exhibition for the late artist Mona Saudi. Present at the opening of the current exhibition were Hind bint Majid Al Qasimi, Chairwoman of the Sharjah Businesswomen’s Council and Nawar bint Ahmed Al Qasimi, Vice Chairperson of SAF and daughter of the late artist, Hala El Rayess.