Most collectors have made it through economic upheavals before. Yet the COVID-19 calamity rocking the global economy is frightening. The collapse in business activity that began in February is much more severe than in previous recessions. Hopefully we’re almost through the big break. But the path of bottlenecks to economic growth is uncertain and depends on governments making smart policy choices, nauseous consumers regaining confidence, and businesses finding smart ways to incorporate new health protocols into their operations.

The pandemic has already hampered the art world. Museums, galleries and auction houses are closed and are laying off staff. Art fairs scheduled for spring and summer have been postponed, moved online or canceled entirely. Artists who bank on sales of upcoming shows are wondering where their next paycheck will come from.

With the pandemic still developing, it’s difficult to accurately predict its long-term impact on the art market. However, we can at least start to assess its short-term impact on collectors and what that likely means for sales and prices for the remainder of 2020.

What’s on the minds of collectors?

Today, most collectors have more pressing issues to deal with than buying art. They have hit the pause button and will likely only re-engage with the art market when there is less uncertainty about the depth of the economic downturn and the path to recovery. This is especially true for collectors who own businesses, who are senior executives of companies facing financial difficulties, or whose family members have been affected by the virus.

Although this is a guess, I suspect that at least 80% of buyers in the United States with the means and desire to spend $ 50,000 or more on a work of art are now sitting on the sidelines. This is true despite all the valiant efforts of galleries and auction houses to digitally engage with their customers. For most collectors, seeing something in person, whether at an art fair, gallery, or auction, is an important and fun part of the shopping experience. Without it, they are quite comfortable putting off what is an expensive and discretionary purchase.

For collectors who have continued to engage in the art market, a mismatch in price expectations has kept deals from closing. Buyers are looking for big discounts on previrus prices, in the range of 50-60%. But discretionary salespeople are holding on to the work they delivered before the crisis. Business owners and other collectors in need of cash flow might consider selling works from their collections at lower prices in the coming months. But their first stop is often their private banker to see if they can borrow more to finance their cash needs, rather than selling artwork and incurring sales commissions and capital gains taxes. Sellers of high-quality equipment remain rare.

A hidden problem for the market is that art fairs, auction houses and galleries will likely be among the last businesses allowed to reopen. Additionally, collectors as a group tend to lean older. As such, even when the art world ‘reopens’, many collectors will likely remain cautious about re-engaging with the physical art world until COVID-19 tests and therapies become available. . Those particularly averse to risk may even delay their visit to an art fair, Broadway show, or restaurant until a vaccine is available, which may not be for 18 months.

The last downturn in the art market began at the end of 2008, when financial panic gripped the economy. As today, many collectors have withdrawn from the art market and sales have plummeted. As shown in Figure 1, global art market sales (as measured by the annual Art Basel / UBS Art Market Report) fell 36% in 2009. Sales struggled to recover over the following years. The capricious nature of the art market in times of downturn is further illustrated in Table 2. During the last recession, the global art market shrank further and recovered much more slowly than in the past. global purchases of luxury handbags, jewelry, clothing and footwear. 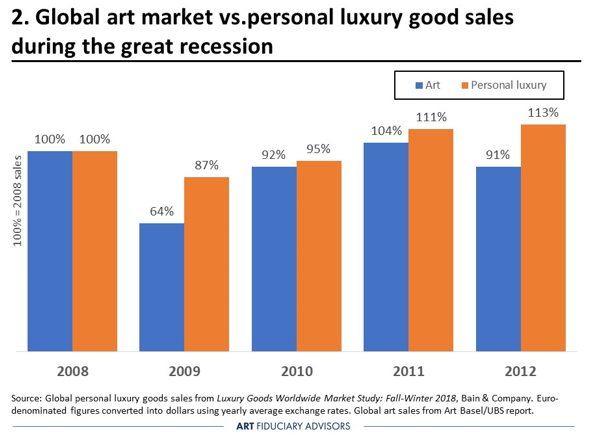 For 2020, I have a feeling that global art sales will likely decline at a faster rate than in 2009. A drop of 50%, or more, is likely for three reasons. First, the current economic recession is likely to be much more severe than what happened in 2009. The unemployment rate in the United States peaked at 10% in October 2009. However, Goldman Sachs recently revised its projections. of coronavirus, noting a more marked drop than originally thought. They now believe unemployment will peak at 15% later this year.

Second, collectors were free to walk around a gallery, attend an auction preview, or visit an art fair during the last recession. This is not possible now and will likely remain a problem for the rest of the year.

Finally, sentiment and momentum can make a big difference in the willingness of collectors to open their wallet and purse. In February 2009, the sale of the Yves Saint Laurent collection gave a much needed boost. The designer died of brain cancer on June 1, 2008. Later that summer, when the economy and the art market were still strong, his estate announced that his collection of fine art and of decorative arts would be sold in Paris at Christie’s in February 2009. The sale of the collection of 733 pieces went as planned, despite the global economic crisis that began in late 2008. The sale broke many records, including new world records for Henri Matisse, Piet Mondrian and Constantin Brancusi. Sales grossed $ 483.8 million, well above the pre-sale estimate of $ 300 million. The amazing results of these sales, which have been widely reported around the world, have helped remind collectors of the potential financial rewards of owning art. Yet in April 2020, nothing like the sentiment-boosting YSL sale was announced.

How much are selling prices likely to drop this year?

Price prospects vary considerably depending on the artist and the quality of the work sold. In Annex 3, I share my take on the likely drop in selling prices this year compared to what it would have cost to buy a similar work before the COVID-19 crisis. 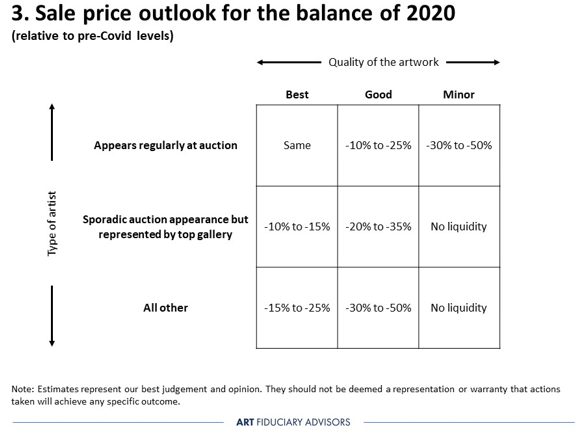 For example, artists who regularly appear at auctions tend to be the best known and most collected. When a masterpiece becomes available for sale, either privately or at auction, collectors are often ready to â€œexpandâ€ for what they may see as a once-in-a-decade opportunity. Their willingness to stretch is unlikely to be deterred by a deep recession, which is why the price they would pay this year is likely to be the same as if they bought it in 2019.

But a good work by the same artist will elicit a different response. The absence of so many buyers in the market means that the seller will have to accept a discount. Because the artist is well known, the size of the rebate is limited by speculative buyers willing to commit capital in the hope of returning the work later. Works of art in this category are likely to sell for 10-25% less than they would have been last year. As for the minor works of these artists, because speculators do not hunt them, nor seasoned collectors, sellers will have to accept even larger discounts to close a deal.

Artists lower in the matrix tend to have fewer collectors who are familiar with or interested in their work. There are also fewer, if any, speculators willing to invest capital in these types of artists now. As a result, galleries will need to attract buyers with substantial discounts, compared to the first tier of artists, if they hope to close business.

As the COVID-19-induced lockdown continues to unfold, collectors should be alert to four art-related financial topics:

Doug Woodham is the Managing Partner of Art Fiduciary Advisors. He can be contacted at [emailÂ protected].

The opinions expressed in this article represent our best judgment and opinion. None of the statements or estimates included here should be taken as a representation or warranty that the actions taken will achieve specific results. Artwork courtesy of @donna_adi on Instagram.